Woody Allen’s 1989 film Crimes and Misdemeanors is a fascinating cinematic essay that wrestles with the moral and ethical underpinnings of the modern world. Dr. Judah Rosenthal, a successful ophthalmologist, is at the center of the movie’s drama. Having been involved in an extramarital affair for many years, his cover begins to collapse. As Delores, his mistress, threatens to expose everything, Dr. Rosenthal seeks the spiritual guidance of one of his patients, Rabbi Ben (who is nearing blindness). Sadly, the doctor ignores the rabbi’s advice, and turns instead to his gangster brother to have Delores murdered. The brilliance of Allen’s film arises from his portrayal of the ethical corruption of each of his characters and the extent to which he plays on the sense of sight. Ironically, the ophthalmologist, who specializes in physical sight, is corrupted by ethical blindness, while the rabbi, who represents morality, is physically going blind. Indeed, the juxtaposition of sight and insight figure prominently in both Allen’s film and this week’s parashah, Lekh Lekha. By focusing our exegetical lenses on the parting of ways between Avram and Lot (Gen. 13), we discover not only a physical separation between the two characters, but also a spiritual and ethical divide that cuts to the very core of their world views.

Genesis 13 opens with Avram’s return to Canaan, after his brief and disturbing sojourn in Egypt. Genesis 13:2 comments, “Now Avram was very rich in cattle, silver, and gold.” The narrative continues, building up to the conflict between Avram and his nephew, Lot: “Lot, who went with Avram, also had flocks, herds, and tents, so that the land could not support them staying together; for their possessions were so great that they could not remain together. There was quarrelling between the herdsmen of Avram’s cattle and those of Lot’s cattle . . . Avram said to Lot, ‘Let there be no strife between you and me, between my herdsmen and yours, for we are kinsmen. Is not the whole land before you? Let us separate: if you go north, I will go south; and if you go south, I will go north'” (Gen. 13:5–9).

Avram is magnanimous in his offer. Whereas one would expect Avram to invoke seniority and seize the prime real estate, he graciously defers and allows Lot to make the decision. How Lot decides reveals much about his nature, in stark contrast to that of his uncle, Avram. We read, “Lot looked about him and saw how well-watered was the whole plain of the Jordan, all of it—this was before the Lord had destroyed Sodom and Gomorrah—all the way to Zoar, like the garden of the Lord, like the land of Egypt. So Lot chose for himself the whole plain of the Jordan and Lot journeyed from the east [mi’kedem]” (Gen. 13:10–11).

Lot’s gesture gives us a window into his character. For Lot, there is only one factor that shapes his choice: appearances. Lot raises his eyes only to be blinded by the beauty and richness before him. He shows no desire to learn anything about the community in which he will reside or its inhabitants. He is seduced by his eyes, and as such, proves to be nothing more than a simpleton. Thus, Rashi and earlier midrashic sources are perceptive in their interpretation of the verse “Lot journeyed from the east [mi’kedem]” (Gen. 13:11). Rashi writes, “He separated from Avram and went to the west—journeying from the East to the West.” Midrash explains this in a disparaging way vis-à-vis Lot: he removed himself from the Creator of the Universe (Kadmono shel Olam), saying, “I don’t want Avram, nor his God” (Genesis Rabbah 41). So not only does Lot’s journey represent a physical separation from the person of Avram, but it also symbolizes abandonment of Avram’s way and, more crucially, the parting from God.

Also critical to our understanding is the Torah’s description of the plain of the Jordan as being like that of Egypt. In a thoughtful and insightful devar Torah delivered this past Passover at a nationwide United Synagogue seder retreat, Rabbi Dr. Steve Brown, former dean of the William Davidson Graduate School of Jewish Education of The Jewish Theological Seminary, asked his students to consider the nature of fruits and vegetables grown in Egypt versus those grown in the Land of Israel. The Israelites wax sentimental for the “cucumbers, melons, leeks, onions, and garlic” of Egypt (Num. 11:6). Harvesting such produce requires that one bend down, focusing one’s sight on the ground. Conversely, the fruits of the Land of Israel require that one be postured upward toward the heavens. Pomegranates, dates, olives, and grapes, the signature fruits of Israel, require the farmer to reach heavenward for the harvest. The physical stance needed for the gathering of produce reflects the spiritual realities in each of these locales. Egypt espoused a culture of earth-bound materialism. When the Israelites left Egypt, they needed to learn to raise their eyes heavenward—physically and spiritually—to match the spirit and yearnings of their lives in the Land of Israel.
Thus, it is not surprising that after the departure of Lot, God commands Avram, “Raise your eyes and look out from where you are, to the north and the south, to the east and the west, for I give all the land that you see to you and your offspring forever” (Gen. 13:14–15). Whereas Lot looks up and sees only the fertile plain of the Jordan, Avram looks up, at the command of God, and sees the Land of Israel in its entirety. Avram is one whose sight goes far deeper than the physical. It is his insight, more than his physical sight that makes him worthy of being chosen by God. To be sure, Genesis Rabbah 39:1 teaches, “Rabbi Isaac told the parable of a man who was traveling from place to place when he saw a mansion in flames. He wondered, ‘Is it possible that the mansion is without someone to protect it?’ At that moment, the owner of the mansion peered out at him and said, ‘I am the owner of the mansion!’ So, too, as Abraham was wondering, ‘Is it possible that the world should be without someone to look after it?’ The Holy One peered down at him and said, ‘I am the world’s Owner.'”

Precisely for this reason, the third paragraph of the Shema’ (Num. 15:37–41) gives us the tzitzit as a reminder of the mitzvot so that we do not blindly follow the dictates of our heart (passions) and our eyes (appetites), which typically lead us astray. Initial appearances are all too deceptive. Only later would Lot discover the moral turpitude resident in Sodom and Gomorrah and ultimately come to regret his decision. In the closing lines of Crimes and Misdemeanors, Woody Allen’s wise professor says, “We are the sum total of all our decisions.” Avram is indeed a role model of what it is to examine each decision thoughtfully and deeply. Laypeople and clergy alike must consistently raise our eyes toward God in weighing both choices in our personal lives and visions for our respective communities. Without such perspective, we are doomed—if not to the same physical destruction as Sodom and Gomorrah, then to a spiritual and ethical demise. When we do allow the Torah’s timeless ethics to guide our decisions, when we cherish life’s intangibles as well as its material gifts, we affirm God’s presence in this world. 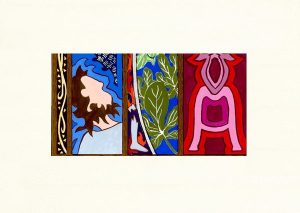