Unrelenting human wickedness leads to the collapse of humanity and the world. Toward the end of last week’s parashah, we read of the dissolution of boundaries; divine demarcations that brought order to a chaotic world. Torah teaches a cryptic story of “divine beings who cohabit with the daughters of man” (Gen. 6:4), illustrating one violation of the boundary between heaven and earth. And then, in the verse that follows, we are told, “The Lord saw how great was man’s wickedness on earth and how every plan devised by his mind was nothing but evil all the time” (Gen. 6:5)—evidence of the human destruction of moral and ethical boundaries. Not surprising, God responds in kind or as the Rabbis say, midah k’neged midah (measure for measure). God vows to “blot out” humans together with animals and begin anew. It is Creation reverting to chaos.

Umberto Cassuto (1883–1951), professor of Bible at Hebrew University of Jerusalem (1938–1951), paints a stark picture of this dramatic moment triggered by Genesis 7:24: “the waters swelled on the earth for one hundred and fifty days.”
The verb “swelled” connotes here a continuing state: the power of the water upon the earth continued one hundred and fifty days, and did not decline in appreciable measure till after this period . . . So the chapter closes with an awe-inspiring picture of the mighty waters covering the entire earth. We see water everywhere, as though the world had reverted to its primeval state at the dawn of Creation, when the waters of the deep submerged everything. Nothing remained of the teeming life that had burst forth upon the earth. Only a tiny point appears on the face of the terrible waters: the ark that preserves between its planks the seeds of life for the future. But it is a mere atom and is almost lost in the endless expanse of water that was spread over the face of the whole earth. A melancholy scene that is liable to fill the reader with despair. What will happen to this atom of life? (Cassuto, A Commentary on the Book of Genesis: Part Two, 97).

Professor Cassuto successfully dramatizes the world in which Noah found himself. God’s severe punishment reinforces the message that the person of Noah is an island of virtue in a sea of corruption. Only he and his family (along with animals) merit being chosen as the remnant that will recreate the world entirely. Prior to the flood, they were the “tiny point” of hope; and, after the flood, they literally become a “tiny point” preserving the “seeds of life” on “the face of the terrible waters.”
Every one of us has the capacity to become the “tiny point” of hope and change. Daily, we continue to face chaos and the destruction of moral and ethical lines. The challenge is to act in God’s image while demonstrating the loving-kindness of Noah. Only then will we restore order to a world in desperate need. 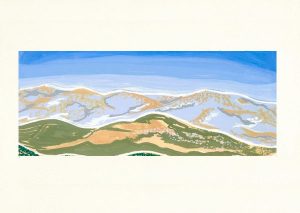