Sight and vision play an important role in the two opening narratives of Parashat Vayera. At the beginning of this week’s Torah reading, the newly circumcised Abraham, resting in his abode of Elonei Mamre, “looks up” and sees “three men rooted before him” (Gen. 18:1–2). Their appearance triggers a flurry of activity in the homestead of our ancestors as Abraham and Sarah scurry to perform the mitzvah of hakhnasat orhim, hosting guests in one’s home. These mysterious messengers are pampered as guests, and then deliver the news that Sarah will conceive. The gesture of Abraham setting his gaze “upward,” proves to be both a physical and spiritual act. The spiritual mirrors the physical as he tends to the needs of total strangers. Juxtaposed to this story of generosity and kindness, we then encounter the narrative of Sodom and Gomorrah with their wicked inhabitants. Interestingly, it opens with the same men setting out on their journey, and in sharp contrast to Abraham’s upwardly gazing posture, they “look down toward Sodom.” Once again, the spiritual and physical acts intermingle and mirror each other. What more can be learned about the contrast and positioning of these two stories?

Rabbi Samson Raphael Hirsch explains, From the hospitable meal at Abraham’s, they stood up and looked towards Sodom . . . Sodom offered the most complete contrast to the simple pure atmosphere from which these men were just emerging. They had just seen the foundation of a nation laid on two factors: a) sanctifying the body with all its urges and lures in pure moral submission to God in brit milah (the covenant of circumcision) and b) practicing universal brotherly love, as in the kindness that they themselves enjoyed in Abraham’s home. The hospitable meal at which they had just announced the first foundation stone of the future people of God offered such a contrast to Sodom, formed such a loftiness to the Sodomite debasement to which they now had to wend their way, that they “looked down to the plains of Sodom with criticizing gauging consideration.” For that is the meaning of va’yashkifu, that “they looked down.” (Commentary on the Torah: Genesis, 318).

Shakespeare was a master of juxtaposing opposites in his writings, and so too Torah. The stark contrast between the example of our ancestor Abraham and the behavior of the people of Sodom and Gomorrah gives us pause to reflect on what it means to build an ethical and moral civilization. Rabbi Hirsch emphasizes this notion in commenting on the expression used for the men looking out toward Sodom, “vayashkifu.” They look down, literally and figuratively, upon the evil that is unfolding in these twin cities. Abraham, on the other hand, looks up. The divine quality of the three men that have just appeared in his home shines through and through. And Abraham rises to the occasion. Yet, for Abraham, it is a matter of not only raising himself, but raising up humanity. Hirsch points out beautifully the complementary qualities of particularity and universality that we encounter in Abraham and Sarah’s tent. Particularity, as represented by brit milah (circumcision and being welcomed into the covenant); universality, as actualized in Abraham opening his “doors” to total strangers.

Modern Jews wrestle daily between the two poles represented by our ancestor’s gestures some four thousand years ago. Far from only nurturing the narrow, particular identity toward deepening his roots, Abraham knows well that one must look outward and upward simultaneously. We cannot selfishly and narrowly tend to our own needs while the world cries and burns around us. In this very moment, such a tension is deeply felt in the Land of Israel in general, and in Jerusalem in particular, as the Jewish people struggles with the meaning of power and sovereignty on the one hand—being a people at home and emboldened to live freely in our homeland—and being attentive and sensitive to the needs of those with whom we share this blessed and passion-filled land on the other hand. Deep rootedness should propel our hands to reach out in embracing and bringing others to a sense of kedushah (holiness), as we act in the sacred image of our ancestor Abraham.

Hirsch succeeds in sharpening our exegetical focus as we read through this text. For it is not simply the contrast that is of import; we must also recognize these moments as “the foundation of a nation.” Abraham’s descendants must sanctify their bodies and practice kindness to build a sacred future. Indeed, every moment in life presents us with the choice between Elonei Mamre or Sodom; it is a decision between embracing the presence of God and our fellow humans and banishing the Divine from our midst. Abraham is a multi-dimensional Israelite, concerned about particular identity with an eye to the universal world. May we always be blessed with the gumption and sight of Abraham, choosing the path of Elonei Mamre. 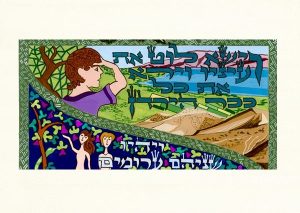