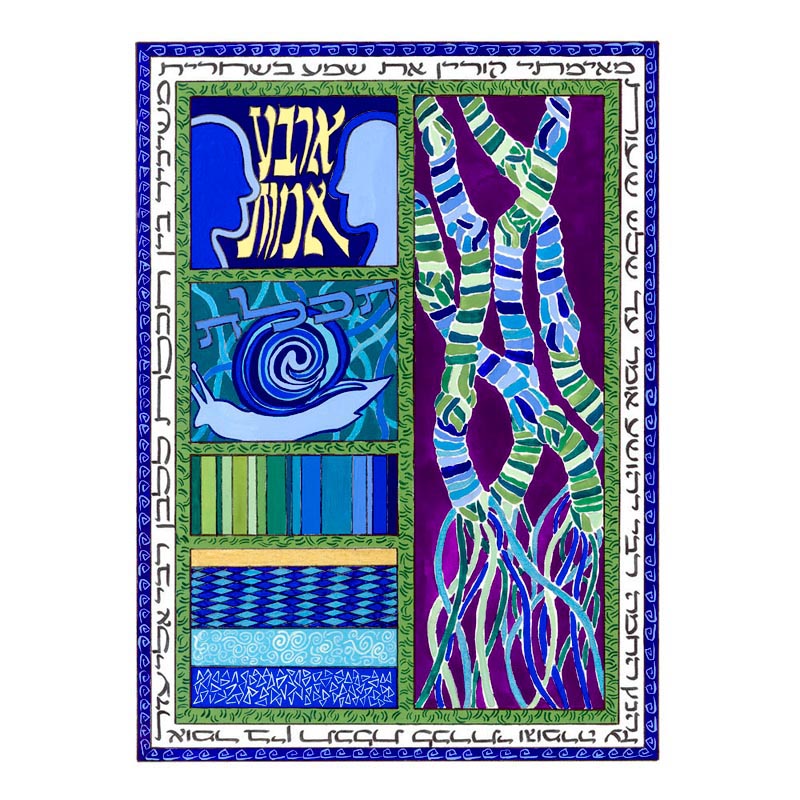 Five images related to the Shema adorn this illumination. The top left image shows two individuals facing each other with “four amot” inscribed in Hebrew letters. According to Talmudic teaching, one may begin reading the Shema only when one can recognize an acquaintance at a distance of four amot (arm lengths) (Berakhot 9b). Before we declare our belief in God, we must be able to see the Image of God in our fellow humans The second image is a hilazon, field snail, the source of the dye for the thread of blue in the tzitzit (Numbers 15:38). The third image animates Rabbi Eleazar’s opinion which calls for a later recitation time, when one can distinguish between blue and green. The lower left cartouche alludes to the teaching of the Sages, “Tekhelet, the blue dye, resembles the sea, and the sea resembles the firmament, and the firmament resembles the Sapir stone, and the Sapir stone resembles the throne of glory” (Menahot 43b). This midrash links heaven and earth as the recitation of the Shema bridges the earthly and heavenly realms. Finally, four tzitziot dance down the right panel, tied at the top but free-flowing at the base, suggesting that commitment to the mitzvot is compatible with freedom.