If ever a ritual item encompassed the essence of Torah and Judaism, it is the tzedakah box. Although it is often translated as ‘charity,’ tzedakah comes the Hebrew root tzedek, meaning ‘justice’ or ‘righteousness’. Indeed, the first appearance of this word in the Hebrew Scriptures is found in Genesis 18:19, when God is about to disclose to Abraham the plan for the destruction of Sodom & Gomorrah. Of Abraham, God declares, “For I have singled him out, that he may instruct his children and his posterity to keep the way of the Lord by doing what is just (tzedakah) and right, in order that the Lord may bring about for Abraham what God promised him.” Giving of one self and giving of one’s resources in the community, is indeed doing what is just. It is incumbent upon humanity to give to those who are in need. This very special collection of boxes weaves together poetic teachings about tzedakah and hiddur mitzvah, the beautification of the mitzvah, in these attractive, unique pieces of art. Boxes can be purchased separately or as a set of three. 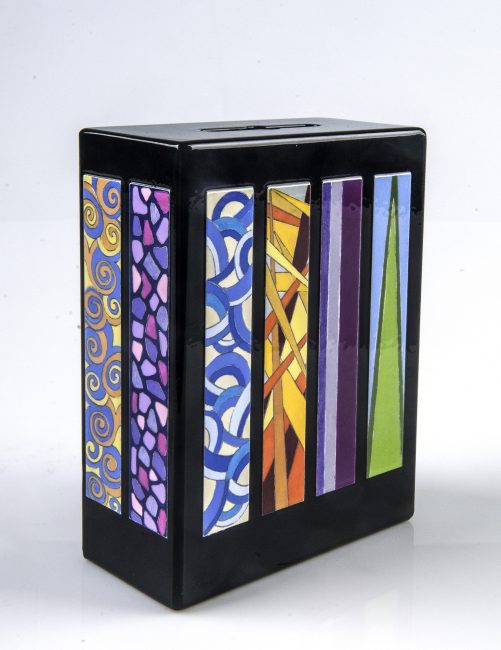 This design is inspired by a midrash found in the Babylonian Talmud, Tractate Bava Batra 10a. “Rabbi Yehudah teaches: Ten resilient (strong or mighty) things were created in the world: mountains are mighty, but iron cuts through them; iron is tough, but fire penetrates it; fire is resilient, but water extinguishes it; water is strong, but it evaporates into mist; mist is strong, but wind disperses it; wind is powerful, but the body inhales it; the body is resilient, but fear weakens it; fear is strong, but wine diminishes it; wine is intoxicating, but sleep overcomes it; sleep is overwhelming, but death conquers it; and stronger than death is tzedakah—as it is written, ‘ Righteousness (tzedakah) saves from death’ (Proverbs 10:2).”

I think of this teaching as a Chad Gadya of sorts . . . ten elements (which are really twelve!) with each successive element overwhelming its predecessor. The main point of the midrash is its final line which underscores the vitality of tzedakah. Giving and righteousness, both tangible and intangible legacies, can ultimately save us from a spiritual death in this world. Giving and righteousness perpetuate and enrich life. The design and colors reflect this notion – vibrant colors in a modern style move cheerfully across the panels. Each panel mirrors each element of the midrash. When one contributes tzedakah to this unique box, one is reminded of both the miracle of God’s creation and of the privilege and blessing of giving. Hands, head and heart are drawn together in pursuit of this beautiful, life-affirming mitzvah. 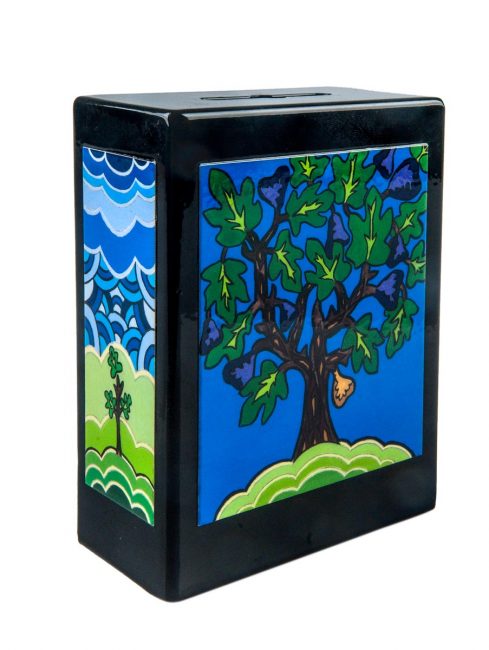 Ma’asar Kesafim (tithing a tenth of one’s income) is a distinctly Jewish practice based on the notion of biblical tithing of agricultural produce. While the Bible does not actually command us to give a tenth of our income, Torah establishes a norm of caring for the local and wider community. Giving in Judaism is not called “charity” which signifies a voluntary act, but tzedakah, righting the imbalances in society. One nineteenth century European Jew writes of this tradition kept by his pious grandfather, “He kept a sort of a journal, written in pure, clear Hebrew, in the form of a folio, which is in my possession. One day he recorded in it his decision to dedicate one-tenth of his earnings to charity. After that, he would prepare an exact account of his earnings and at the conclusion of the month he recorded the institutions and the private parties who received portions of the tithe.” (Mitt Liv, Mellan Oster och Vaster, p 21 as translated by Jay Rovner, The Ma’asar Kesafim Ledger, 3). Thus, the design is an attempt to inspire people to be generous and connect their giving to our biblical roots.

To animate this notion, I use the fig tree as the leitwort for each panel. As the box is turned and turned again, one watches the growth of the fig tree from sapling to full fruit bearing tree. Also according to midrash, Torah is compared to a fig tree because the fruits of the tree ripen slowly and unevenly at different times . . . so too our journey with Torah. We learn Torah gradually over our lifetime. In addition, death entered the world when Adam and Eve clothed themselves with fig leaves. Proverbs teaches, “Righteousness saves from death.” In Panel 2 of the box, one sees a quote from Genesis 28:22, the promise made by Jacob as he begins his long, arduous journey to Aram (and his exile from home): “Of all that You (God) give me, I will set aside a tithe for You.” The panel and box remind us of both our ancestor Jacob and the notion of giving back – giving back to God, Source of Promise and Blessing. The tree gradually grows until it is fully realized in Panel 4. There are ten figs on the tree. One of the figs is colored in gold echoing the tradition of giving one tenth of the fruits with which one is blessed. This box serves as a continual reminder of the need to count one’s blessings and to share them with others. 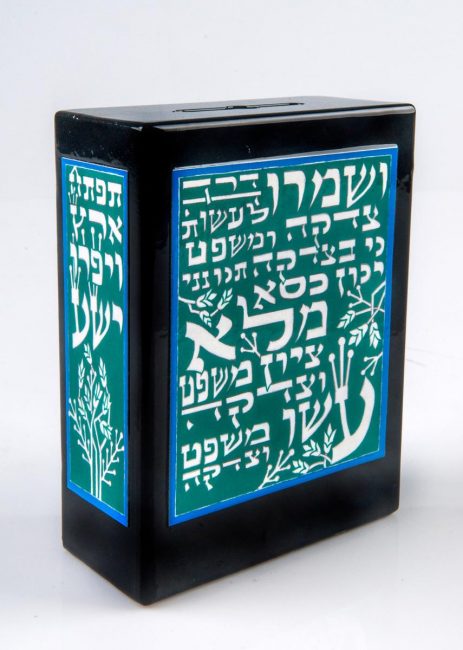 This paper-cut style design weaves together a selection of verses that explicitly mention the word tzedakah. The two thinner panels on either side of the tzedakah box each contain one half of a beautiful verse taken from the Book of Isaiah 45:8, “Let the earth open up and redemption sprout, let righteousness (tzedakah) spring up together.” This verse sets the theme for the entire box: sprouting and flourishing – thus the saplings and branches (that mirror the crowns of Hebrew letters) in the design. The wider panels weave together a tapestry of verses: Psalms 106:3: “Perform tzedakah at every moment”; Proverbs 8:20: “I walk in the way of tzedakah”; Isaiah 61:10: “For God has wrapped me in a robe of tzedakah”; Genesis 18:19: “Keep the way of God doing what is just and tzedakah”; Proverbs 16:12: “For the throne is established by tzedakah”; Isaiah 54:14: “You will be established through tzedakah”; Isaiah 33:5: “God filled Zion with justice and tzedakah”; Jeremiah 22:3: “Do what is just and tzedakah”. The paper-cut design is deliberately chosen, giving a sense of the potential to let hidden aspects of our identity and qualities shine forth. The deep blue border around each panel evokes Amos 5:24: “Let tzedakah flow like an unfailing stream”. The water nurtures the saplings as it nourishes people. Returning over and over again to this tzedakah box, we renew life for others as life renews us.